World Jet Boat Expeditions are a close-knit collection of friends from all walks of life who are passionate about jet boating, led by the group’s fearless leader Kiwi Duncan Storrier.

The friends have shipped their four purpose built Hamilton 141a alloy jet boats, all powered by ‘High Torque’ Chevrolet V8 383 cubic inch motors and Hamilton HJ212 jet units to the farthest corners of the planet. Expeditions to Africa, Nepal, Bhutan, Siberia, Mongolia, Patagonia, Argentina and Alaska have all been undertaken and the stories told in this magazine. Exploring remote areas, navigating uncharted rivers without any kind of support or chance of rescue and the ability to fix anything anywhere under all manner of extreme conditions, have kept this cohesive group together for more than 10 years.

So why would the toughest of these outdoorsmen not get out of their run aground stranded jet boats? Crocodiles!! The group have just returned from far north Queensland, making the iconic journey on many Australians ‘bucket list’ to the northern most tip of Australia, Cape York. You see, when you run aground on these rivers the issue is not being stuck, but rather being eaten. The Crocodiles in this region are the largest living and most aggressive reptiles on earth, apex predators that will attack anything.

The four jet boats were shipped to Universal Cranes yard in Townsville Queensland in a specially prepared 40 foot sea container, which generally consumes all boats ‘double decker stacked’, equipment and spares including: engines, jet units, 50 fuel cans, camping gear, supplies and recovery gear. The return road trip to Cape York of some 3000 km includes 1600 km of harsh dirt roads only open during the ‘dry season’. Mine Specification Holden Rodeo 4x4 utilities were chosen as tow vehicles and the trailers loaded up to 1400kg, previously destroyed by Patagonian roads, repaired and fitted with improved specification springs for the anticipated and ‘legendary’ rough roads of the Cape York Peninsula.

The group jet boated many of the local rivers between Townsville and Cairns before the big push up the Cape York Peninsula, including the Russell, Mulgrave and Tully. These rivers were very shallow in the lower reaches, mostly sandy and tricky to boat. The launching also saw some ‘recovery’ work putting the 4x4’s to the test on the very first day. The rivers soon became a little steeper as they made their way to the mountains with the leading boats often seeing large crocodiles sliding into the water, one defiant crocodile choosing to stand his ground with jaws wide open. Crocodiles in this area grow to 5 meters in length, longer than the Hamilton Jet Boats themselves and with ‘locals’ telling chilling tales of people being taken off the banks or even out of their fishing boats, the group were determined not to get stuck. Typically the boats ventured 100 km upstream, far beyond the reach of conventional craft in these low flows. The basalt rocks in the upper reaches of these rivers are over 1,500 million years old and provide very unforgiving rapids to navigate. Those boaters used to the well sorted shingle gravel rivers of New Zealand and having the greatest motivation to not get stuck, soon found themselves being launched into the air as lurking rock’s suddenly appeared in locations least likely expected. Despite having 12mm thick high tensile 6083 alloy hull bottoms, most boats were very second hand by the time the expedition had completed these three rivers.

Heading inland over the range from Innisfail to the tablelands on the last of the good roads, the expedition was set for a long push up to Cape York and the goal of boating the northern most river in Australia, the Jardine.  With our local www.jetboatingaustralia.com ‘fixer’ Mike Collins joining us, we had plenty of local knowledge on our side. Mike had boated many rivers in this region and was keen to venture further upstream with the group than ever before.

Our plan was to travel north on a combination of the ‘Development Road’ and ‘Telegraph Track’; both often rough dirt roads and the only way north. These roads are repaired once per year after the ‘wet season’ rains stop, however we were early for the ‘season’ and the road conditions were rough; the upside was that we had literally millions of square kilometres to ourselves, rarely seeing any other vehicles or people. Typical Australian ‘Roadhouses’ primarily serving the ‘Road trains’ transporting cattle, indigenous communities and cattle station owners, are the only signs of any civilisation. These were located about every 200km and served as our meeting points to regroup as we travelled some 11 hours per day. The roads were red ‘bull dust’, much like talcum powder; corrugations were epic in size and brutal on equipment. Washouts and small creek crossings were countless, all the while trying to avoid Kangaroos, wild cattle, 2-meter long lizards and parts falling off the trailers travelling ahead!

Very quickly mudguards, trailer guide posts, lights, wheels, springs and number plates all started to disappear. The bulldust would fill large potholes or washouts and behave like water, so there was no warning and the trailers often crashed into these; occasionally there would be a sign in the middle of nowhere “warning dust holes”.

Eventually, after staying overnight at a Roadhouse, we made it to the Jardine River Ferry Crossing, some trailers were repaired and one boat suffered a split 180-litre fuel tank due to the rough roads; learning from a previous experience the fuel jerry cans were quickly rigged into the fuel system, which meant stopping every 40 minutes on the river to change over to the next jerry can.

Two boats made ready to launch at the ferry crossing for a trip to the Jardine River sea mouth in the Gulf of Carpentaria. We chatted to a local Aborigine about our expedition and he warned us about being careful when launching, as a crocodile had recently eaten a man. “He was standing next to me, just as you are now and a croc took him” our boats were quickly launched! The river was filtered by sand and ran gin clear, all the better for spotting Crocodiles. One boat managed to get exceedingly stuck in the sand at the river mouth and meant all hands were required to push one boat over the sand some 150 meters back to boatable water, this required a bed of sticks, a lot of pushing and finally a tow from another jet boat, all as the water level quickly dropped. While these jet boats need just 75mm of water to plane in, they do however require knee-deep water to get on the plane; they can do so in just half a boat length; even with four men, equipment and 300 litres of fuel on board.  A relaxing trip back was had in the twilight, fishing and drifting whilst dinner was caught under the watchful eye of the odd reptile.

A great night was had around the fire enjoying freshly caught fish and a few drinks. Sleeping in swags not too far from the river bank was not enjoyed by some, one Kiwi who feared the crocodiles so much, slept in his boat far from the river. With all boats repaired, maintained and fuelled, the group set off for the big run up the Jardine, some 120km each way. The fantastic benefit of a jet boat is that they leave no foot print of having passed by, have little or no wash in shallow waters and are able to transport you to places never seen by other people; perfect for this ancient wilderness.

The Jardine River, away from the influence of the river mouth, is little more than a crystal clear, sand filtered small creek with tree-lined banks. This combination of shallow water boating, log-strewn riverbeds and very few places deep enough to stop made for some very exciting boating for many hours; well worth the trailer journey to get there. The jet boats made their way upstream negotiating around and climbing over the logs, often during brief heavy rain showers despite the hot temperatures. Some boats found themselves beached on logs and no one willing to get out and push! So new tactics were employed with one boat pushing another ‘nose to transom’ to avoid the Crocodiles, some very funny conversations were taking place at the time. A few more dents and scrapes on the hulls resulted and the groups fearless leader lost his windscreen. A fantastic experience, one that saw a traverse of this river almost from the Gulf of Carpentaria in the West to the Coral Sea in the East before low fuel dictated a turn for home.

Camp was made overnight at a beach in the Gulf before heading to the northern most tip of Australia, Cape York; a few minor creek crossings only and the goal had been achieved. Some walked around the tip of Australia while others took the boats onto the beach where you could literally see across to Papua New Guinea. All started down the long dirt road travelling during the day and night, visiting a downed WW2 plane wreck and a swim in the Eliot Falls along the way. A big push was made to Cairns and finally Townsville, over two days staying at a traditional Roadhouse along the way. Not without its issues again, trailer springs changed out, some suspension removed altogether with the axle bolted directly to the trailer frame, bearings replaced and one trailer losing a wheel in spectacular fashion as all the wheel studs had pulled out of the hub.

A great expedition completed, which was part jet boating and part road trip in an area you would not expect to go river boating.

The boats are now en route to Tasmania for some much-needed repairs just in time for the next Expedition around the Apple Isle in September 2015. 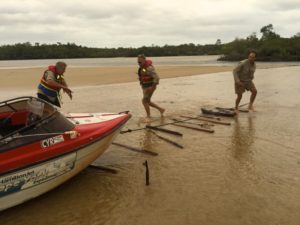 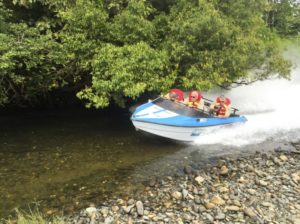 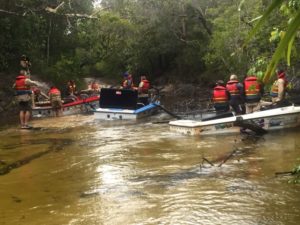 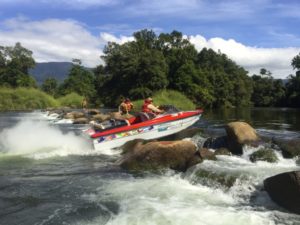 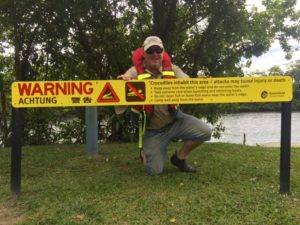 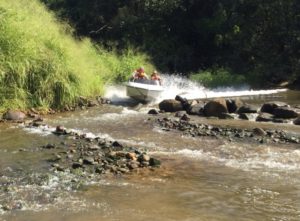 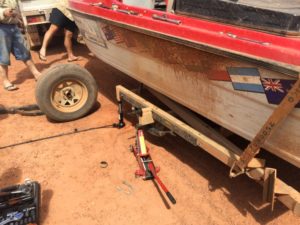 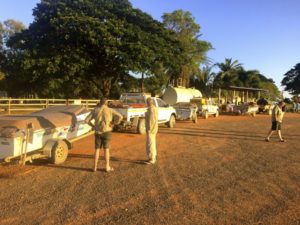 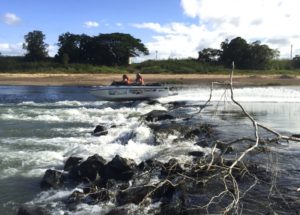 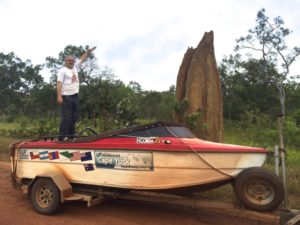 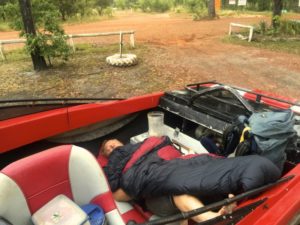 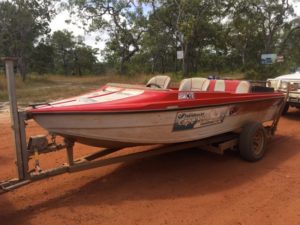 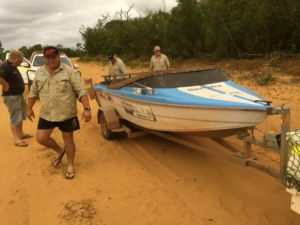 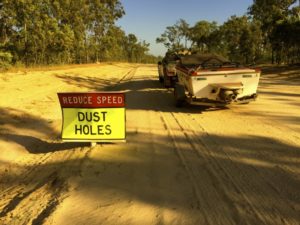 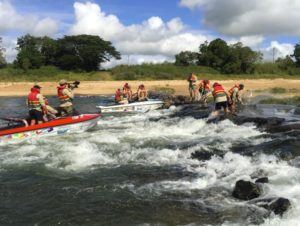