The Otago Classic Rally was run and won recently in Dunedin, by a Kiwi, for the first time in six years. The drought was broken by Clinton’s Derek Ayson in a beautifully prepared Nissan powered RS 1800 Escort.  He’d been running second all weekend to former British Rally champion Alister McRae in a BDA Escort but when the Scotsman suffered electrical problems (the conrod took the wiring off the back of the alternator on it’s way out through the engine block) the prize was set to stay at home.
But the biggest prize was always the jetboating after the event, put on by a handful of die-hard jetboaters out of Christchurch for the Aussie competitors before their return home. It’s the third time the ‘add on’ to the Otago Rally has been held and this one was no less enthusiastically received.

Former Australian Rally Champion Ross Dunkerton, Premier Class champ Brad Goldsborough (who was second in the Classic in a hot Dado 1600), Keith and Maryanne Callinan, and their teams joined four jetboaters from Sydney who’d flown in specifically to join in the expedition up rivers they only dream about.
But the weather had other ideas and the massive flooding in May all but put paid to the plans. Come Tuesday, the designated day for boating the southerly squall howled across the Canterbury Plains and the prospect of a day perched at the Carlton Bar was looking more inviting.
The prospect of boating either the Rakaia or Waimak gorges was washed out to sea with the thousands of cumecs of water pouring out of the mountains.
With the pressure on to find an alternative the Hurunui and Ashburton were considered even they  were too high. Over an ale James Murdoch  suggested the Ashley  would be good, a handful of boats had made the normally impassable trip from the main road bridge right through to the gorge only at the weekend.
Normally the domain of canoeists the Ashley,  just north of Christchurch was in perfect condition. The flow, although still dirty was reminiscent of the Waimakariri in low flow.
Murdoch and his Hamilton 151 was joined at the riverbank by Jeff Horne in his 141 Hornet  and the author and Matthew Fallow in Duncan Storrier’s expedition boats Adventurer and Discovery.... and  Nick Sullivan joined the floatilla in his 19’ Eagle... After driving through rain and sleet on the twenty minute drive north to the river, the day blossomed into full sunshine and set the tone for a magnificent day on the water. Even Merv Moore who had left his prized Impala home in the in the shelter of his garage, raced home to retrieve it, to avoid missing out.

After the usual tinkering to get all boats running we set out upstream through the shallows, weaving through the maize of islands in the lower reaches. The author although resident in Christchurch many years ago had never had the opportunity to boat the Ashley. Popular consent has it, there’re only really three or four chances a year to boat it given the normally low flow and unless everything lines up, including the time to boat it, it’s not something that’s easy to lock into the calendar. The river makes a few transitions descending from the hill country and we made our way through the braided area, funnelling into the valley.
Discovery was overheating and Matthew Fallow and crewman Clark Marshall deciding to return to the trailer to remedy and follow on up with Merv Moore when he arrived. Discovery’s passengers were off loaded and the now heavier Hamilton’s continued on, drawing even more of the murky water. The icy cold flow was no incentive to run aground today but we’d certainly increased our odds.

Climbing out of the plains and into the valley came more willow trees, often hanging strategically over the very water we needed for the jet units. If we thought it was hard in the nimble 141’s, spare a thought for Nick Sullivan who negotiated all 19 feet of his Eagle through the same path. While it was by far the best looking jetboat on the water and attracted the attention of all the Australians, it was making Nick’s life at the wheel more stressful than ours. Nevertheless the tunnel hull made the gorge bridge and beyond into the rocky canyon before retreating to wait for the rest of us who were already pushing on up amongst the rocks.
Seemingly blocked by two huge boulders, the decision to go no further was easy.... but Jeff Horne’s reputation for boating further than anyone else elevated him above the rest of us and over the white water between two rocks.  Unphased Jeff eased Explorer up through the water and on out of sight around the corner. For the anxious skippy’s this was certainly the end of the road! The directional change to downstream on Jeff’s successful return was much appreciated and the prospect of lunch at the Gorge bridge was now firmly in their minds. But as all jetboaters know, negotiating rocks up stream is a snack compared to downstream... and pretty soon our passengers got a taste of why the pilots were less relaxed than they.

All boats safely joined Nick Sullivan at the bridge but anyone who says they didn’t graze or hit at least one  rock on the ten minute roller coaster ride out of the gorge is delusional... just some did it more heavily than others. One nameless publican and current NZ River racing Champion was overheard to say ”...something shifted when we hit that rock... and it wasn’t the water!”
The run downstream through the willows was more challenging than upstream and reports from the lead boat (from an Aussie with a bourbon, back at the trailer!) that they were airborne at least once through perfectly positioned tree trucks lying in the way.
While the author of this short story is proud to have lifted the spirits of the visitors by exposing them to the thrills of jetboating, there is a moment that not only dampened their spirits but also their feet as the full weight of five adults brought the 141 to a grinding halt, so close but so far from the main channel. Witht he way blocked the following boats were forced to look more carefully for an exit strategy and a perfect shoot emerged, obviously missed by the now grounded Adventurer... her passenger’s sampling the crisp snow fed waters of the upper Ashley. It is only the belief that some photographic evidence may exist to support the notion of this figment of the imagination that has prompted me to recount this portion of the day’s excursion.

The anticipated race to the bridge was signalled when James Murdoch raced on by in chase of the sleek tunnel up ahead... the challenge was answered by Nick Sullivan when the pair powered on downstream looking for every short cut possible.
They raced on by Discovery coming upstream, who had by now overcome the engine temperature problems of earlier in the day... but Jeff Horne was flagged down to help a stranded Impala. Seems earlier in the day when Merv and his passenger had met up with Discovery he’d clipped something solid with the back of the unit and the T3 steering nozzle had parted company with the boat. His only way out now was a tow downstream to the trailer
The inevitable happened with our racers up front, and Nick confused the deceptive open stretch of water for the main flow. As James dropped the 151 down through a narrow gut, the tunnel powered on over shallower and shallower water with our trailers in sight, less than a kilometre away. With over a hundred metres in any direction of unboatable water, the decision was made to bring the trailer tot he boat for retrieval but the Aussie passengers were unperturbed. On coming to a rest Nick casually looked around and asked “....if they had any Bourbon”... with the obvious reply, Nick then added, ”now would be a good time to open it!

Eventually back at on trailers, everyone, passengers and drivers alike talked about how fortunate we had been to boat the Ashley in such condition... with weather that broke long enough to experience a river that offered a wide range of conditions from braids, to tight twisting farmland through trees, to the rocky gorge that is normally not accessible by jetboat. Stories of Rob Gerard exploring the Ashley river in the 1980’s resurfaced and the memories of those exploits came flooding back. Jeff Horne was sure we could have got right through to Lees Valley, quite possibly a first for jet boating. That was a trip we were not prepared for on this occasion... but certainly some of the stars had lined up today, dishing up a hell of a jetboat adventure, one any red blooded kiwi jetboater would grab at the chance.
Thanks to all the guys for providing their jetboats and giving the tourists a taste of boating kiwi style. If you’ve got a jetboat and would be interested in be part of what seems to now be an annual event in Canterbury on a Tuesday in May 2010, drop an email to [email protected] and we’ll get you involved. It might just be another jetboat run but the satisfaction of showing others our sport and magnificent countryside is very rewarding and one they’re grateful for the oppportunity. Keith Callinan had a forgettable Otago Classic in his BDA Escort, steering, then gearbox failure all on day 1 and his rally was shot. When interviewed he said “... if it wasn’t for the jetboating he knew was in store, the weekend would have been a complete disaster.” Roll on 2010!

Aussie Jet Boaters on this trip:

Jet Boat History: 3 boats featured in this story have travelled to some of the worlds most remote locations. See video clip. 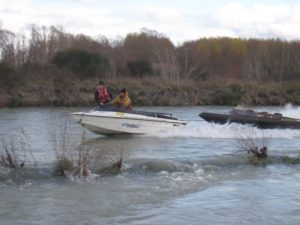 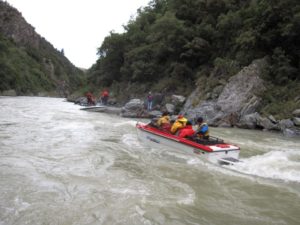 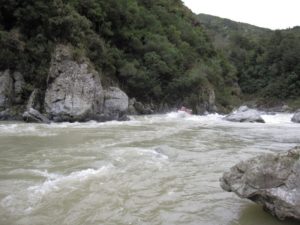 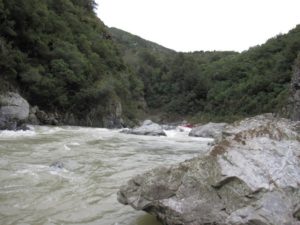 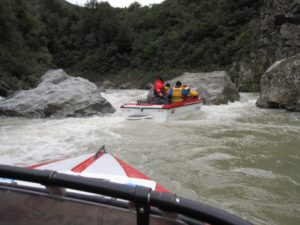 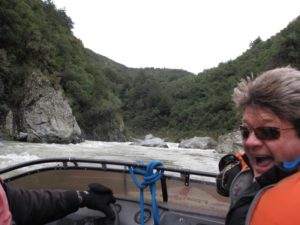 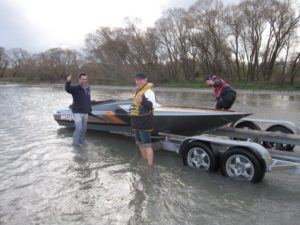 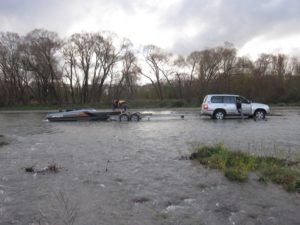 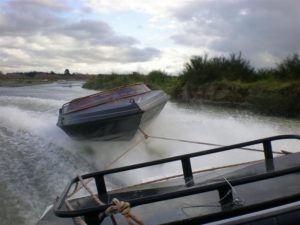 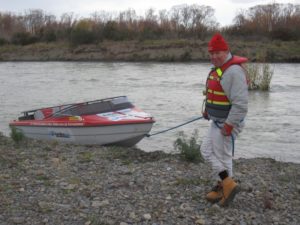 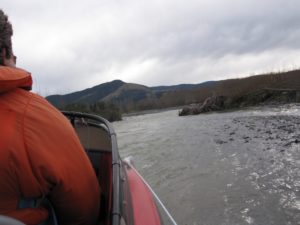